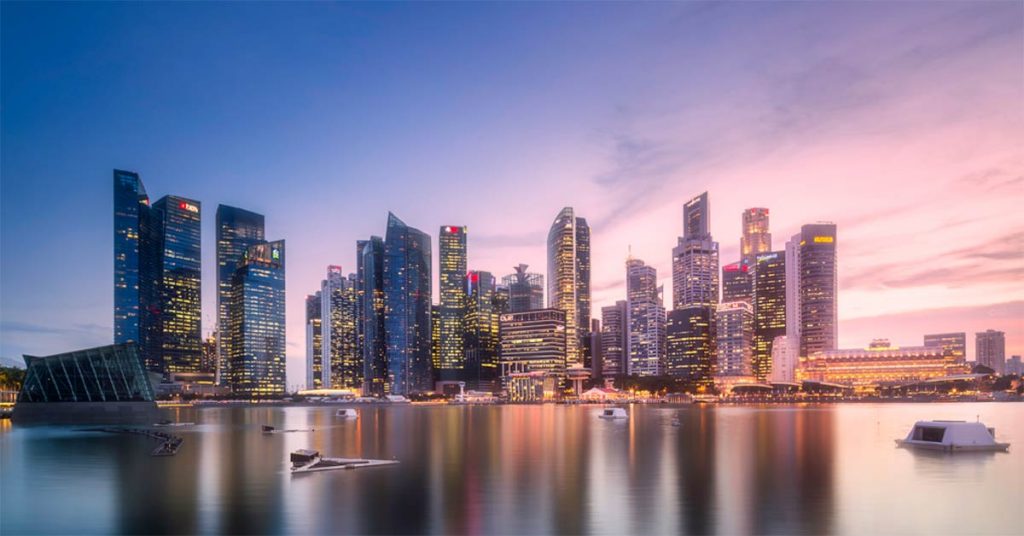 Pre-cool air handling units (PAU’s) have become a widely accepted method of treating outside air for Singapore ACMV design engineers.  The concept of pre-treating outside air before it enters the main air conditioning system is generally regarded as the most efficient and economical way to treat outside air.  However, sufficient dehumidification by the PAU must occur in order for the system to function properly.

ACMV design engineers often assume that the cooling system downstream of the PAU will further dehumidify the outside air to its specified set point, but this is rarely the case, as these air handling or fan coil units are reacting to internal heat loads rather than the humidity of the airstream. As the space temperature approaches or falls below the temperature set point, the air handling or fan coil unit may cease to cool the air sufficiently for dehumidification to occur and hence humidity will rise in the space.

Building air conditioning design using dedicated outdoor air systems (DOAS) to pre-treat outside air is a growing practice in humid climates, ensuring that the correct relative humidity is maintained within the space and eliminating the mould and mildew issues that regularly occur when humidity is not correctly controlled.  This has long been common practice in mission critical applications such as laboratories, but has often been overlooked as a design solution in building ACMV design.  Not only does this practice deliver correct humidity control, but it also reduces energy consumption by separating the latent and sensible cooling loads, and overcoming the traditional practice of over-cooling large recirculating airflows to remove moisture.

Further, Singapore offices can receive a Green Mark credit for humidity control below 65% RH, which can be achieved with a DOAS on minimum outside air.

The Common Approach
Common system designs typically include the use of a PAU to deliver outside air at no less than 17°C dewpoint.  At this air supply condition, a room maintained at 23°C will only achieve approximately 68% RH, excluding any latent load created in the space.

Other system designs often mix untreated outside air with the return air prior to being delivered into the air handling units (AHU’s) or fan coil units (FCU’S).  In this case, the AHU’s or FCU’s are required to remove any moisture above the specified acceptable level.  If there is insufficient heat load in the space, or if these units are oversized, their cooling capacity will ramp down regularly and will allow moisture to build up in the space.  When they ramp up again because of an increase in space temperature, the cold air from these units will cool the space air below its dewpoint, causing condensation to occur in the room along with inherent mould problems.  In short, AHU’s and FCU’s controlled only by space temperature exhibit no control of the indoor RH levels.

An alternate approach is to maintain a temperature set point low enough so that the air conditioning never ramps down, ensuring that the air humidity is controlled.  However, this leads to overcooling of the space, causing discomfort for occupants and the wastage of valuable energy.

Figure 1 below is actual logged data from an installation in Singapore that is mixing 10% outside air with return air prior to the air handling unit (AHU).  Although an extremely consistent room temperature is maintained, there is insufficient load to make the AHU perform the required dehumidification.  The supply air condition averages 18.8°C, the room average temperature is 22.8°C but RH averages 77.7% over the 12hr period.  Room condensation and its inherent problems are inevitable in this instance.

Excess Humidity Problems
The most common problems associated with improper control of indoor building RH are:

-Mould growth: Mould may grow indoors in wet or moist areas, including on walls or wallpaper, ceilings, tiles, carpets, insulation material and wood.  If moisture is allowed to accumulate in a building, mould growth will occur.  Many different types of mould exist and all have the potential to cause health problems.

In order to reproduce, mould creates tiny particles called “spores”.  Spores are carried in the air and may cause health problems if inhaled by people who are sensitive or allergic to them.  Common symptoms include a running nose, irritation of the eyes and skin and sometimes wheezing.  Occasionally people may have more sever reactions.  Very rarely, people may develop a mould infection, usually in the lungs.

-Occupant Discomfort: Humans are sensitive to humid air because the human body uses evaporative cooling as the primary mechanism to regulate temperature.  Under humid conditions, the rate at which perspiration evaporates from the skin is lower than it would be under dry conditions.  Because humans perceive the rate of heat transfer from the body rather than temperature itself, we feel warmer when the humidity is high.

-Moisture Damage: Indoor moisture levels that are not properly controlled can damage the building fabric and its contents.  Sometimes this damage is easily seen but can also be hidden inside wall and roof spaces.  Regardless of where it occurs, moisture damage can lead to serious problems such as rotting, staining, peeling paint and even structural failure.  All of which are costly to remediate.

Dedicated Outdoor Air Systems
Ventilation air, whether introduced to satisfy minimum code requirements or as make up air to provide a positive air pressure to limit infiltration, will in most cases, be the major source of moisture addition.  Therefore, no matter what the air conditioning system design, be it DX or chilled water, a central plant or individual zoned area units, it is best practice to treat the outdoor air to remove humidity before it is introduced into the space or air conditioning system.

With DOAS, the outside air is dehumidified independently of the room temperature set point, allowing the dehumidification to be based on the required air dew point for the space and ensuring that no additional latent cooling load is added to the internal AHU’s and FCU’s.  The AHU’s and FCU’s can then ramp cooling capacity up or down based on the sensible load in the space without allowing room condensation to occur.  More complex systems can have variable air dewpoints based on room humidity measurements.

Once dehumidified to the correct levels in a DOAS, air can be either combined with the return air stream and then cooled in an AHU or FCU to maintain the space temperature, or reheated to a temperature so as to not overcool the internal space and be delivered directly to the room.

The benefits of a DOAS are:
– Outside air load can be controlled independently from the space sensible cooling load.
– Outside air can be conditioned based on dewpoint control to deliver the required RH levels in the space.
– Outside air volume can be varied (Demand Controlled Ventilation).
– Internal set point temperatures can be raised without affecting occupant comfort as perspiration is more effective in lower humidity.
– Internal AHU’s and FCU’s can be down sized as only sensible cooling is required.
– Dry coils in AHU’s and FCU’s reduce service requirements and fan energy consumption.
– A reduced risk to mechanical designers because moisture related problems are eliminated and improves overall client satisfaction.

Conclusion
Controlling humidity with a dedicated outdoor air system is a cost efficient option.  Lower power consumption and building maintenance costs deliver a positive return on capital invested and result in a relatively short payback period.  There are also intangible benefits including increased occupant comfort and the elimination of unsightly mould.  The Air Change approach is cost competitive with desiccant systems, because of their reduced complexity and maintenance costs, as well as not needing to have a regeneration air supply.  There is an Air Change DOAS for every application, providing supply air with a dew point temperature anywhere between 3.5 and 13°C.